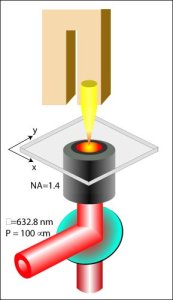 The technique we use relies on the locally enhanced optical fields close to a laser illuminated, sharp metal tip. The sample is raster scanned below the tip which can act as a highly confined excitation source providing a considerable signal enhancement and spectroscopic images at very high spatial resolution.

Our experimental setup is based on an inverted optical microscope with an x, y scan stage for raster scanning a transparent sample. The excitation is provided by a HeNe laser operating at 632.8 nm that is reflected by a dichroic beam splitter and focused by a high numerical aperture objective (1.4 NA) on the sample surface.

A sharp gold tip is positioned near the focus of the beam and maintained above the sample surface at a distance of ~1-2 nm by means of a sensitive shear-force feedback mechanism. The gold tips with a radius of 10-15 nm are produced by electrochemical etching.

Both Raman scattered light and luminescence are collected with the same objective, transmitted by the beam splitter and separated by a long pass filter. The signal is then detected either by a combination of a spectrograph and a charged coupled device (CCD) or by avalanche photodiodes (APDs).

Tip-enhanced near-field microscopy allows for optical imaging with a spatial resolution below 20 nm and spectroscopy on a nanometer scale. 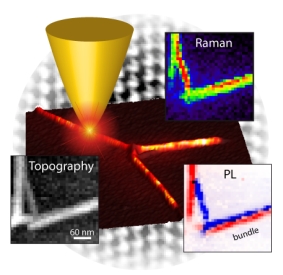 Tip-enhanced photoluminescence (PL) and Raman scattering images of single CdSe nanowires were obtained with a spatial resolution of less than 20 nm. They show that the optical properties of the CdSe NWs vary significantly within a few nanometers leading to strong spatial fluctuations in both PL intensities and energies. Energy gradients of up to 1 meV/nm could be observed. In addition, we showed that two bundled nanowires featuring different band gaps due to different diameters could be spatially resolved by their optical properties.

TENOM is found to be highly suited to study the optical properties of CdSe NWs on nanometer lenghtscales. 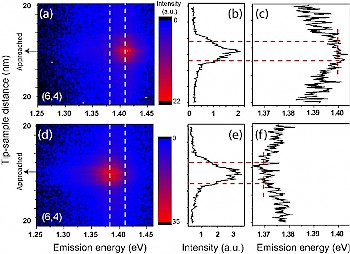 2D photoluminescence maps taken at two different positions of a single(6,4) nanotube (a,d) as a function of tip sample distance. The difference between the two emission energies, marked by two white dashed lines, is due to DNA-wrapping.