Carbon nanotubes are cylinders made of carbon atoms. The multiwalled form was first reported by Iijima in 1991 more than ten years ago. Two years later, single walled carbon nanotubes (SWCNTs) were reported, which are typically between 0.5 and 2 nm in diameter, but several microns in length. Because of their unique mechanical and electrical properties, carbon nanotubes are considered for various technological applications, e.g. integrated circuits, nanotube actuators and optoelectronic devices.

The exceptional optical properties of SWCNTs arise from their quasi-one-dimensional structure for which the wavelength of light lies in between tube length and tube diameter. Quantization of the wave vector along the circumferential direction forms 1D electronic energy bands that give rise to sharp van Hove singularities (vHss) in the electronic density of states similar to molecular levels. Optical transitions between these vHss lead to sharp and rich molecule-type spectra. Continuous wave vectors in the direction of the tube axis on the other hand determine solid-state properties such as electron and phonon dispersion.

The structure of a nanotube is determined by the chiral vector

that corresponds to the vector around the tube circumference in terms of the unit cell vectors of graphene a1 and a2. Thus, the tuple (n,m) uniquely defines the structure of a particular tube. According to tight binding calculations, tubes with (n-m)mod3 = 0 are metallic or semimetallic. All other tubes are semiconducting with a bandgap in the near-infrared. 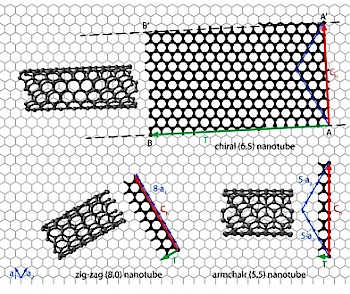 A single-walled carbon nanotube can be considered as a rolled-up graphene sheet.

There are several features in a typical Raman spectrum: the radial breathing mode (RBM), the disorder-induced D-band, the tangential G-band modes and the second-order G'-band. Single nanotube spectroscopy has revealed that behind each feature, there are many physical phenomena concer- ning their dependence on tube diameter and chirality. 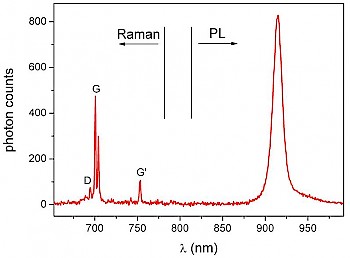 Simultaneous Raman and Photoluminescence (PL) spectrum of a single (9,1)-tube

For our CNT samples, carbon nanotubes are dispersed in water and spun on a glass slide. Due to strong Van-der- Waals interactions the tubes tend to arrange in bundles inside the solvent. To investigate individual nanotubes, they have to be seperated, which can be done by adding surfactants (e.g. sodium dodecyl sulfate - SDS) that build micelles around single tubes, making them soluble. Another way is wrapping of nanotubes with single-strand DNA (see figure below). 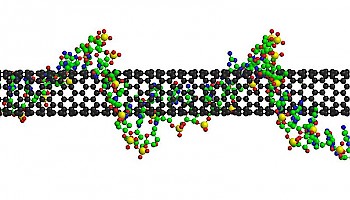 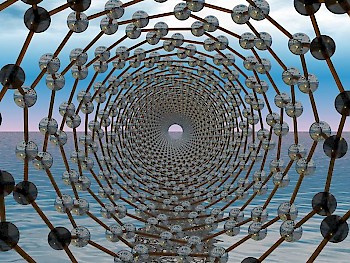